One of the most perplexing things for me to wrap my mind around is the outwardly vicious and vocal hatred found on twitter these days. And while I am guilty of venting my frustrations whilst tweeting at Hollywood elites, crooked politicians, and mainstream media personalities, I normally decide to reserve my opinions and judgement of fellow citizens and keep those thoughts to myself.

I opened my personal twitter account in 2009 so that a I could keep up with local gossip and fashion, lifestyle and movie star accounts (I found my way to twitter because I had several lifestyle and political blogs that I read daily).

In 2009, we were in year two of President Obama’s administration. My personal professional life was taking a new form – I had joined a team of men who had invented a innovative new way to keep America safe and protect the Southern US Border. I took my position there where I was to work on Public Relations/Government marketing and implement federal contracting into our business model.

Through this position, I found myself meeting regularly with law enforcement officials, Department of Homeland Security, ICE, Customs and Border Protection personnel – including being present in briefing sessions with key government officials such as Janet Napolitano and once in a conference with President Obama himself.

During this time the world enjoyed a booming introduction to social media. Our government officials were handing out cards with their agencies social media sites and the market (where I was planted) was moving awkwardly into this new age.

Back at my part-time job, writing about local politics, for our local newspaper, I stormed the publisher with the great idea that our by-lines should now also contain our twitter handle.

At first he gawked. But because I could show him within a few short weeks that the twitterverse could be used as a great marketing tool for our struggling local newspaper to drive followers to purchase papers to read stories that we teased with our 90 character tweets, he signed on to the 21st century quickly. We had good success with our tweeting at the newspaper. I believe they still do.

I soon left my job at the newspaper to focus solely on my role as Government Public Relations in the company that I now had a small ownership interest in. This is where I began to understand the enormous possibilities of social media. I originally thought that social media was a boon to my other publishing endeavors in lifestyle publications. And frankly, it was.

However in the political and governmental theater – I began to see a disturbing pattern. A social backslide, you could say. As various government agencies began to post results and information on twitter, an emerging pattern of citizen opinion began to dominate public discourse.

I monitored hundreds of twitter accounts including the President of the United States, his cabinet officials and all departments in the government with Twitter accounts. The rhetoric wasn’t horrible during these years. I found most posts to be informative and helpful. I used my twitter account to introduce my product and its capabilities and associate our product with publicly addressed issues. Life was good.

Fast forward to 2015. Election season was upon us. The political atmosphere was volatile. The Republican candidate in the lead was a twitter phenomenon. Candidates were sparring online and then came Wikileaks. It was from there I found the “anonymous” movement, the Chan boards and Reddit.

Then, on November 9, 2016, as a private citizen, I responded to a tweet by the actor Jeremy Piven, who was responding to a tweet by the director Joe Carnahan. Piven was upset and could not understand how Donald J. Trump could have won the election. I simply replied, “that’s easy – America spoke last night”.

That very day, I came to understand that we had moved into a new era- what is now both a blessing and a curse – Twitter: for haters, not lovers.

I endured days of harassment and hatred from Joe Carnahan and his followers. Death threats, public mocking, slander and all manners of offensive tweets. Never being one to back down, I researched Carnahan, whom I had never heard of and began tweeting about his career. Two tweets in about his “bad boys” movies – and he blocked me. Alas, I realized twitter could be used for good and bad marketing. I also realized that now I had an avenue to get my opinions out to those whom I would never otherwise be able to speak to.

Bump number two came when I responded to a Chelsea Handler tweet disagreeing with her slander and mis-representation of President Trumps efforts to block Russian sanctions. I simply suggested that we ought to be looking into Uranium One.

Over the last few years, my personal account has now become shadow banned in every way possible. I have few followers but I suspect nobody really sees my personal tweets.

Two of my businesses have great twitter responses. They are non-political lifestyle accounts that enjoy the freedom from shadow banning.

Now, let’s talk about the verified Twitter hate, the President and the ability of everyone alive to voice their opinion. Never in my adult life, would I ever consider telling the President of the United States to f#ck off and die. Nor would I spend my waking days, negatively commenting to ANYONE. Not any human.

I researched Share Blue and Media Matters and I now know about the Share Blue bots and I understand the war for our thoughts. I have started researching the twitter responses that appear with every Trump tweet.

This brings me to the point of this blog – who are these people hating on the President? For one, most of them share a common follower – Anthony Scaramucci- Which seems weird but possibly they are bots he has identified. A few examples: Usually these haters will have few followers and their bios look “canned”.

You also have your garden variety haters such as the Krassenstein Brothers, Jeffrey Gutterman, the Palmer Report and Little Ryan Hill who spread their hate. But their accounts look disingenuous and fake but these are also easy to spot. Then you have your verified haters: Alyssa Milano, Chelsea Handler, Peter Fonda (and his threats to Barron Trump), Rob Reiner, Rosie and the stooge, Michael Avenatti.

Of course the Hollywood elites are popping off:

And now, we have current sitting politicians such as Eric Swallwell and Adam Schiff taking every possible opportunity to slam the President. 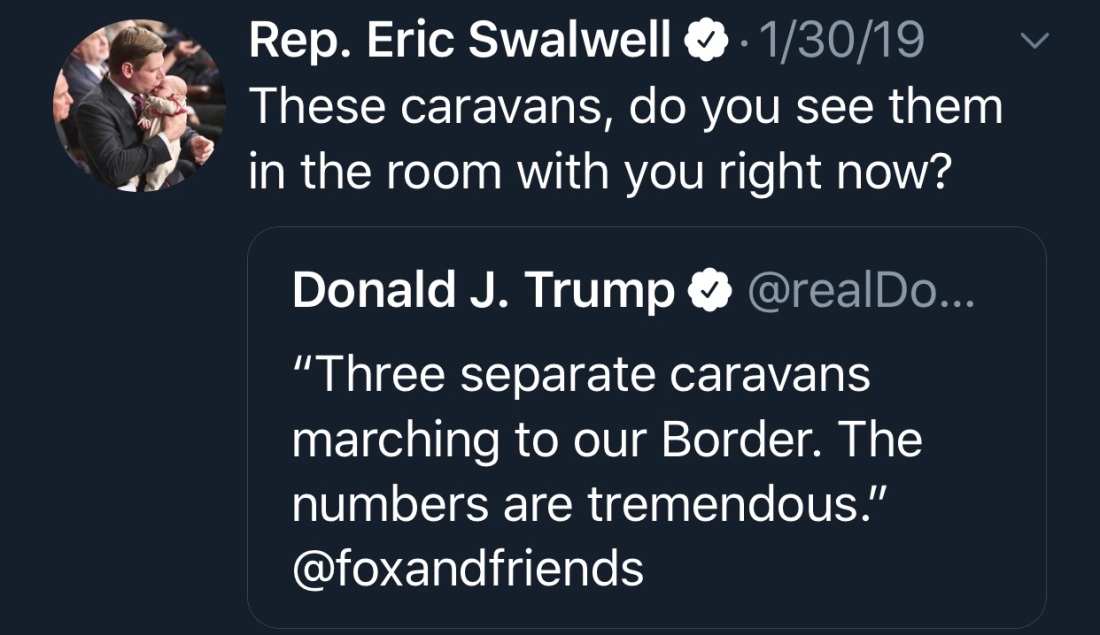 I’m calling for more civility on twitter. Nancy Pelosi said, on the occasion of the State of the Union address that she would show respect to the Office of the President.

I am calling for a more respectful treatment of our President. I will do my part, even as an unverified and shadow banned, oppressed tweeter. Can we expect this from the blue check mark accounts?

Published by We are the FREE PRESS Online

Truthful and factual news. View all posts by We are the FREE PRESS Online